Have you noticed the expressions on the expectant faces of the children in our photos?

Tshisa Talent is uncovering talent which will elevate our communities - through funding received from National Lotteries Commission and National Arts Council.

Have you noticed how the youth are always watching those older than them? Who do they take their cues from? Will they take the high road and be empowered by those they copy? Or will they  choose the low road like a life of drugs or alcohol abuse, poverty and dis-empowerment which has such a negative effect on their community and loved ones?

We constantly evaluate whether the money our funders award to us is being well invested? Read the inspirational story of how Enrico Sam, one of our ‘discoveries’ has transcended his circumstances through Tshisa Talent. He shows young people another way of life.

Enrico Sam, from the remote little community of Green Valley near Plett, fell in love in 2009 when he was just 13 years old! He fell in love with Hip Hop as he discovered his talent for creating amazing dance moves.

This passion came to life in a big way when he performed, six years later, at the red carpet Tshisa Talent Competition Finals in Plett in 2015.  This was funded by the National Arts Council.

He won the title of Best Dancer and was rewarded with the inspiring opportunity to attend the Remix Laboratory Showcase at the National Arts Festival which was organized by Jane Burden.

“As a 19 old, this experience changed my life. I grabbed the opportunity with both hands and  meeting other artists from the rest of the country opened my eyes. I enjoyed performing with them and appreciated taking part in other activities like singing, Kwaito, Drama, Pop Lock, Break Dance and sequences for team work. We were all very motivated and formed good bonds!” says Enrico. The taste for success afforded through his experiences with Tshisa contributed to his passion for Hip Hop.

Enrico has joined various groups which have come and gone however he remains dedicated to his skills as he continues to innovate and practice, practice, practice! This commitment will pay dividends so watch this rising star. “My greatest desire is to succeed as a Hip Hop star in a big way and to encourage others to believe in themselves and do the same.” says Enrico.

His Open Mic experiences and the Tshisa workshops he has attended gave him the confidence to enter Showville!  You can see him in action on SABC 2, Episode 4 on 23 September 2018. Meanwhile take a look at his promo! 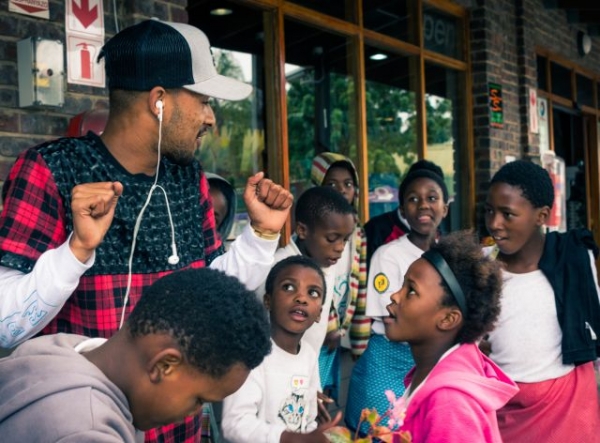