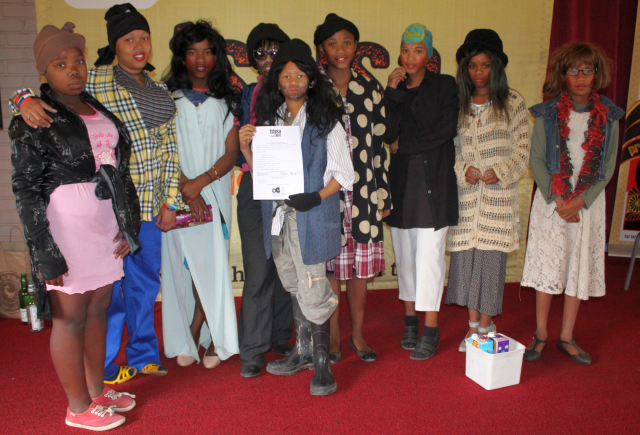 Would you like to know more about the Finalists in the Tshisa Talent Kouga Competition? National Lotteries Commission will be delighted to know that all our hard work as collaborators is coming together and we are set for an awesome competition on Saturday 25 August 2018 at 16h30.

We have just received this video from one of our Finalists, the Ghetto Prophets.  Watch and come to the Finals.  We have a fantastic line-up of performers as can be seen on our Facebook Page Events.

Gina Wana is an actor who appeared as Mandla in the local movie called Diary of Love which was created and produced by Luvvuyo Mayinje.  He longs to create more stories that will change the world for the better.  He is also a DJ.

Golden Voices - Prozia, Abongile, Xhantilomizi and Asemahle – sing their own songs and would really like to become well known as Acapella singers.

Anela Matroos has been performing since she was a tiny tot.  Since then she has sung at every opportunity including family celebrations, church, concerts and is no stranger to talent shows.

Charmaine Swartbooi will be singing “Make you feel my love’.

BOPA - Siphiwo Mbi and Melumzi Mafani - have been performing for around 20 years and will be staging ‘Black Hobos’.

The J-Squad are a really fun group of dancers made up of Keanan Vena, Dawnay Britz and Ronald Petersen.

The Ghetto Prophets will intrigue with a song called, “Sick!” based on real life scenarios.  They love to ‘colab’ with others to change lives in the community by telling the untold stories and answering silent questions.

Asemahle is a song writer and singer who, as a totally dedicated 13 year, has a long career beckoning

Libho was ‘born with a desire to dance in his veins’.  He believes that to succeed as a successful musician, you need to get up and bust a gut like in his Kwaito dance, “Pajuju”.

Yolanda Shweni is a schoolgirl with ambitions which you may appreciate when you hear her Hip Hop Pop song, “Jik ‘zimo”.

Deborah Maconi went through to the Showville Finals which will be aired on 16 September 2018 on SABC 2. Tonight, she gives her all with a song called ‘All of me’.

Alan Davids will be performing his Hip Hop Dance ‘Over the Top. This 19-year-old writes his own songs and longs to produce them in a recording studio.

Dog Unit Pantsula Dancers - Sivuyile Tshatshu, Xolani Olifant, Abongile Nonjewo and Siyabonga Nodaka - are managed by Thabelo Matomela. They are no strangers to success having won ‘Kouga has Talent’ and they featured at the National Arts Festival in 2008.

Siyabonga Matshoba is a Hip-Hop Rap artist who writes his own music and has mixed tape online, called ‘Chopower, why not?’ He has a special passion for hosting events.

Strings will be rapping a song called, “Afkoel Kallit” and hope that this song, like the others they write, will help make the seemingly impossible, definitely possible.

Majo is a seasoned Hip Hop artist with ambitions towards producing music and sound engineering. He aims to “improve the mentality of the Community to create a better future”.

The Black Stars Trio, Luyanda, Vuyani and Yamkela are wonderful Pantsula Dancers who already sport a couple of trophies and certificates.

The Flame Crew are hot as they were the winners in the ‘Showville Competition’ in May 2018 and  they will appear on SABC 2 on 16 September.  They also came second in ‘Kouga’s Got Talent’ in 2016 and acquitted themselves well in SA’s got Talent!